Dancing in the Rain: Inside the Pantheon

There are songs that you might hear on the radio that encapsulate a specific memory.  Perhaps when you were in high school or maybe that first dance with your spouse.  Music is often referred to as the sound track to life, it emotes not only in the melody and the lyrics, but often as the backdrop to a special experience.  Architecture has this affect too—it directly impacts your day, your feelings, and your outlook.  I started to learn this back in my early days when I was in college. 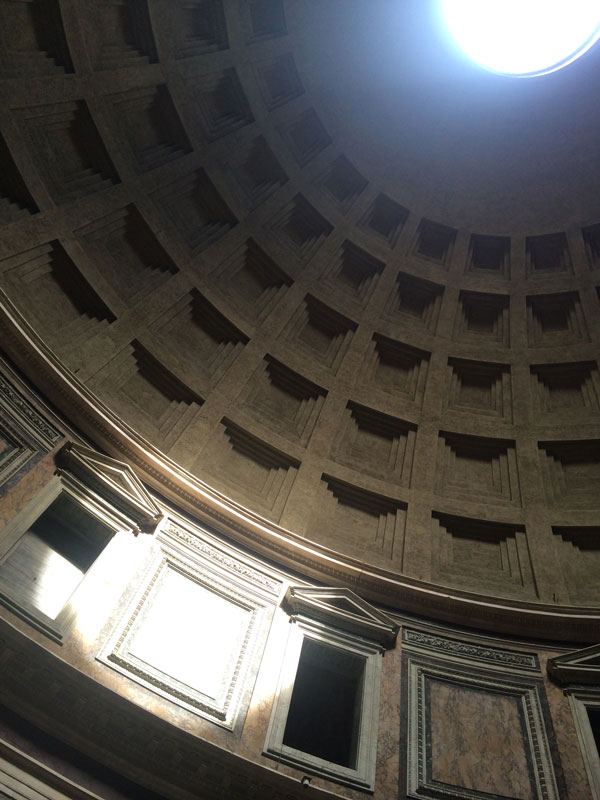 View to the Oculus of the Pantheon in Rome. Photo credit: Peter Twohy

I participated in a study abroad program in Italy.  I lived there for nearly 10 months studying the great classics.  On my commute to class, I passed by the Pantheon in Rome every day—a 2000 year old structure that is still the world’s largest unreinforced concrete dome with a 27 foot wide oculus (open eye) at the apex of the dome.  It is among one of the world’s most well preserved buildings from Ancient Rome.  Having survived the fate of many of the period’s structures, the Pantheon (which roughly translates into Temple of Gods), was converted into a Christian church in the 7th century.  There was once a long set of stairs leading up to the entrance of the Pantheon, but over time the street level, from various changes in Urban planning, has risen 20 feet putting the Pantheon at just about street level, but otherwise the building remains mostly intact.

Inside the Pantheon, we saw the massive structure of the columns that support the entry portico, we saw the ornate design of the marble floor and the Christian alters, we saw the big coffers of concrete that make up the dome, and we also saw the sky (and drains in the floor).  You see having a large, open oculus, when it rains, it rains inside of the building.   I’m not sure how it started, but we quickly learned that to experience the rain inside the Pantheon is a feeling of utter joy.  We would dance and laugh—spirits would be uplifted.  Whenever it started to rain we would all race to the Pantheon to arrive before the authorities closed the building. (Remember, this was Rome, so these things took time.)  In the interim we would partake of the fleeting moments of joy.

I came to learn the specifics of the building like the use of lighter materials to lighten the load of the dome as it rose higher and higher.  I learned about the purpose of the oculus to not only let in light, but to also be a weightless void which allowed for the expansiveness of the dome.   But the purpose of the oculus will always for me be to let the rain in so that one can dance.

Buildings really do affect people’s moods and everything about the experience inside if you design them right. Because of the Pantheon, my goal went from designing buildings that looked good, to something much higher. Yes, it had to be practical, had to be aesthetically pleasing (so our teachers said), but the Pantheon elevated the possibilities to intentionally affecting people’s moods and their lives. Today, this is my goal with every single project.

I recently came across this sketch of the exterior of the Pantheon I’d done when visiting Rome with my wife many years after college.  Being in Rome again and today looking at this sketch brings me right back to those happy days of dancing in the rain inside the Pantheon. 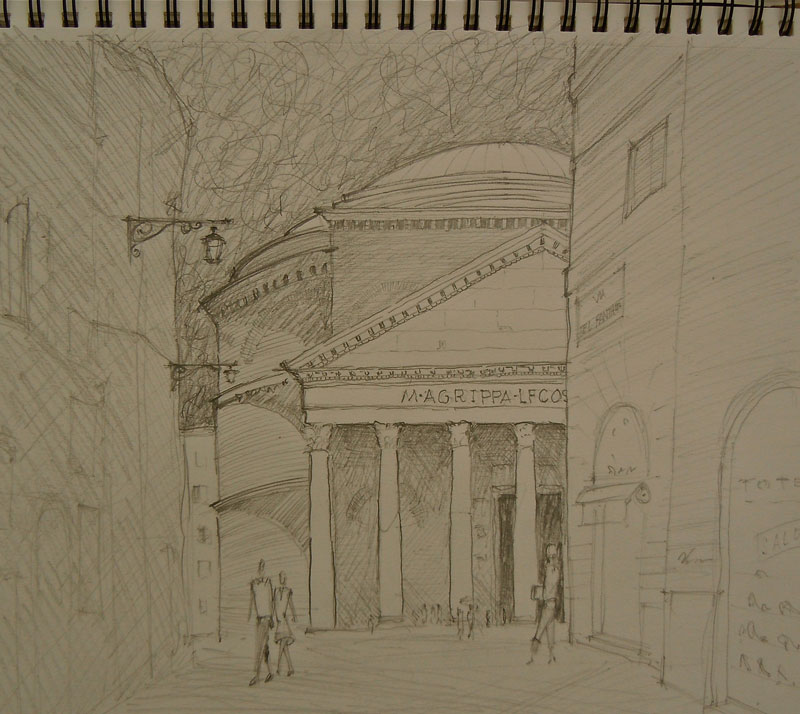 Exterior of the Pantheon of Rome. Sketch by Peter Twohy